Hello! Since this is taking me ages, I’m going to post some comparison images about the last thing that remains to be done for Separate Ways: Chapter 4 and 5 cutscenes.

Keep in mind, this remastered cutscenes won’t be implemented until some coder finds the way to force the game to load these video files instead of the original 512 x 336 pixel low resolution pre-rendered videos.

The coder that was working for me almost got it, so it’s a matter of time some other coder (or maybe the same one when she has the time) polish her work and the videos can be used.

And below you can see a few examples of what I’m doing.

There are countless remaster methods used, most times several of them used in the same camera angle: From a simple AI upscale to a complete re-creation. Sometimes several AI methods are used in the same camera angle, because some portions of the image look better using certain AI upscale parameters while other portions look better using another configuration. And, of course, most background stages use the HD textures from the HD project (remember the camera data for the SW cutscenes is still there). But most times I need to adjust lights and effects to make them match the original lighting of the low-res pre-rendered videos before capturing the backgrounds, and sometimes I need to adjust lights and effects for just for one camera angle…! Well, I could do an entire series of videos explaining the process… XD 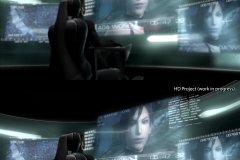 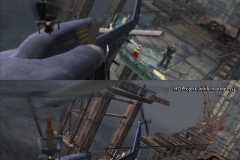